"ON BEING THE RIGHT SIZE"

The title of today's entry is taken from an article by the indomitable Late JBS Haldane (d. 01.12.1964), the brilliant Englishman who was more Indian at heart than anybody else. He chose India as his home for the outrageous liberties we offer... Check him up on Google please! His views are in the nature of a classic- universally applicable to all areas of human endeavour. Today we move away from accountancy and credit [we'll return next week-please see (*) below] and take a critical look at something more cerebral- the issue of the size of a financial organisation- question is- how much water does 'Bigger the Better' hold? Question we would like to ask of Management Experts is : what is this obsession with size man...? Down-size, up-size, right-size, wrong-size, re-size…? The larger, the better- bigger fetish? Are we megalomaniacs….? Mind you, these views are personal and do not claim to trace their lineage to any established Management School, assuming they exist.But our views do have a pedigree, as we stated, and certainly deserve respect, and have to be taken into account by young people who are going to lead the Country's business environment in the years to come !

Being FIs and bankers, let’s talk about them. There is a Bank with a loan + investment book of 1000 crores, with deposits 950 crore, and capital, 50. There is a loaning opportunity of 500 crore, and the Bank raises deposits of corresponding amount. Forget SLR-VESLR. Has the Bank become 1.5 times the earlier size? Manpower remains the same.

Build larger Banks, they say. Will a gaggle of ten banks together, with a business of 100 crores each, and capital adequacy ratio (capital funds to asset ratio, in general terms) of 10%, be smaller, that is will the gaggle be smaller than an entity formed by their absolute merger? Sum of parts less than the whole- can you be sure?

That neat little nursery rhyme sums it all:

Abraham Lincoln had ‘inordinately’ long legs. i.e., high leg/torso ratio, say around 2:1! A press reporter is bent upon embarrassing old Abe. How long should one’s legs be, President, he asks. The reply is –just enough to reach the ground! That’s what the size of an organization do- reach the ground! Not stay in the air!

We recommend you read that classic “On Being the Right Size” by JBS Haldane.

Of course, “Being the Right Size” does not refer to Firms or Banks as such , but like all classic,as I said, its applicability is universal. Here Haldane points out some possible handicaps of size.
﻿
Let us take the most obvious of possible cases, and consider a giant man sixty feet high-about the height of Giant Pope and Giant Pagan in the illustrated Pilgrim's Progress of my childhood. These monsters were not only ten Times as high as Christian, but ten times as wide and ten times as thick, so that their total weight was a thousand times his, or about eighty to ninety tons. Unfortunately the cross-sections of their bones were only a hundred times those of Christian, so that every square inch of giant bone had to support ten times the weight borne by 1 square inch of human bone. As the human thigh-bone breaks under about ten times the human weight, Pope and Pagan would have broken their thighs every time they took a step. This was doubtless why they were sitting down in the picture I remember. But it lessens one's respect for Christian and Jack the Giant Killer.

To turn to zoology, suppose that a gazelle, a graceful little creature with long thin legs, is to become large; it will break its bones unless it does one of two things. It may make its legs short and thick, like the rhinoceros, so that every pound of weight has still about the same area of bone to support it. Or it can compress its body and stretch out its legs obliquely to gain stability, like the giraffe. I mention these two beasts because they happen to belong to the same order as the gazelle, and both are quite successful mechanically, being remarkably fast runners.

To return to organisations, naturally various factors will affect the performance of a ‘system’. Why mechanically relate it to size? Size could be, in cases, the sole dispenser and arbiter, for instance, in the case of a collapsing star or nuclear fission. The latter is simpler to understand. The core of a fission based atom bomb would most likely be Plutonium or Uranium 235. Atoms of both the elements have a peculiarity, a propensity to lose neutrons. When a neutron gets released from the atomic orbit, it may either (i) pass through the inter-atomic spaces and escape from the mass, or (ii) it may hit an atom’s core and in billiard fashion, trigger off further exodus- the so-called ‘chain-reaction’. Supposing we start from Plutonium the size of a marble, probably the neutrons will mostly leak out. If one adds more and more Plutonium to the marble, as if enlarging a plasticine ball, a stage comes when the neutrons get internally trapped and then the mass is ripe for the explosion. This ripe mass is called the ‘critical mass’. In practice, the same effect is achieved using a TNT implosion to bring together small bits of the element together resulting in a critical mass.

Fortunately or unfortunately, organizational effectiveness is not a sole function of size or mass. Incidentally, some experts liken the chain-reaction to the communication process in an organization. Below a critical mass, the message tends to ‘leak out’. In a larger organization, the neutrons may get lost, if the radioactivity is not high enough.

Size impacts the organisation but the strength of this factor would also depend upon social culture, geography, communication, social diversity etc. etc. of both the firm and its environment. What applies in the West need not automatically be applicable to us, ipso facto. For example, in the case of the Indian provinces, smaller states within which linguistic or cultural uniformity prevails, are seen to be more effective and successful. Hence the tendency for our Indian States to get smaller and smaller, and more efficient. A large organisation, say a bank patterned on the Indian polity, would be an organisation with a number of autonomous units in it, with only some functions with the Head Office. It would be more or less like the ‘Holding Company Model’ RBI roots for. RBI officials feel that too large a bank will be a systemic risk-like placing all eggs in one basket.

K is a constant.

© indicates that the formula is the copyright of Aeronsystems.com. The formula does not profess to be a mathematical model, does not claim to have any use (as x does not have any unit and is simply an orphan) and is strictly a case of groping in the dark or good clean fun depending on whether or not you hate PJs. Formula simply says that upto a point, the size may be an asset, and beyond, the deluge, !

If K =100, the graphical representation is as under: 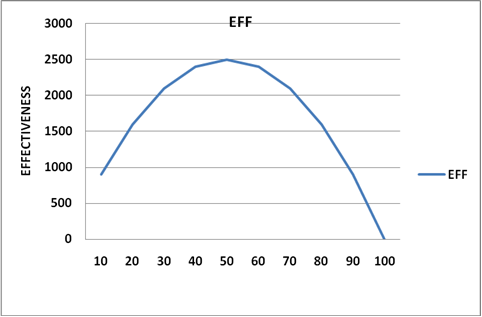 The idea that with higher capital a bank can court bigger exposures and tap huge opportunity may cut both ways. It assumes that the efficiencies of the bank and its staff are scalable- they will go up proportionately with size, or may be exponentially. Human greed being what it is, a larger bank may spread a bigger contagion and require bigger bail-outs as happened in the US. The largest banks fell prey to ‘Sub-prime Crisis’ which, had it been committed by a junior Branch Manager would have been called ‘stupid’ and the episode would not have been couched in sexy words like 'sub-prime'. We have now anointed the term.

There is lot of literature on the net, questioning and critiquing the size fetish, some of it on top websites. The following excerpts are taken from an article by Robert G. Wilmers, Chairman and CEO, M&T Bank Corp. (MTB) writing on Bloomberg’s:

Community Banks have given way to big banks and excessive industry concentration; profits are increasingly driven by risky trading; leverage is taking precedence over prudent lending; compensation is out of control. This toxic combination leads to continued taxpayer risk and threatens long- term U.S. prosperity.

To understand the change, first consider history. Banking once was a community-based enterprise, relying on local knowledge to guide the process of gathering customer deposits and extending credit. Done well, this arrangement ensures that deposits are deployed into a diversified pool of investments, while providing depositors with liquidity and a return on their savings.

Such concentration raises the concern that poor decisions at such outsized institutions can lead to systemic risk.

Management Consultants will always be enamoured of size. The votaries of large banks are powerful, and one strongly suspect, they represent interests of Merchant Bankers and the Bull lobbies, whose business it is to raise capital and render greedy retail investors bankrupt time to time. One longs for the day when greed is replaced by sense and Merchant Bankers and investors shift their preference to small and savvy banks, and not go after size.

STATUTORY WARNING: The views articulated above are sensible, but do not reflect the views of any organisation; they are personal, but are shared by lot of world literature like 'Small is Beautiful' by Schumacher.

(*)friends: next we propose to write on how close we could allow the client to get to us at a personal level.
*****
Posted by Unknown at 11:05 AM